Here's another update from our long-running Olde School Wizardry campaign:

The wizards are eight sessions into the exploration of New Bullishire, an uncharted, tropical land far south of the known realms, and the mysteries and questions have begun to pile up.  New Bullishire is a sandbox, studded with One Page Dungeon Contest entries.  Travel and exploration is governed by a robust series of tables that include weather, equipment breakage, disease, getting lost, wandering monsters, landmarks and natural resources.

Here are nine good questions that have come up at the table over the last few weeks:

1. What was the Bhatvian ship Cherniy Roza doing in the waters off New Bullishire? What caused her to wreck and how did that man-sized empathic worm get aboard?


2. What was the deal with the siren worm anyway? Did it read and understand men's wishes or just mirror some of their surface thoughts as a lure? Was it just trying to chew faces off, or did it have some other purpose for gumming skulls?

3. Who or what is "The Lizard God" mentioned in the inscription?

4. Who or what were the ancient builders who left behind the leaning stone pylon, the southwestern ruins, and the ruined city of The Ape Cartel? What is the connection to the legendary Gringling script and what became of these lost builders?

5. How did the Pig-mies (porcine humanoids) of Hampton-on-Sty come to be, and how on earth do they know the Walvian tongue? 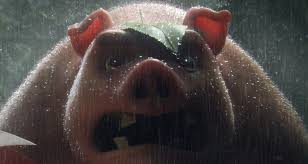 6. Who was that water-walker up the mast on that southern wreck, and what was the connection with the dire seals, skull kelp, and the southern light?

7. The Ape Cartel is strong and well equipped. Can they be negotiated with?

8. What is the nature of the raised,  round, stone plaza in the crater northwest of New Teed? Why does it glow and what is its relationship to the fallen star?

9. What's the deal with the floating cloud palace encountered north of New Bullishire and its crew of lightning-gun-armed glider-monkeys? Was there any connection to the more recent glider-monkey attack?

As always, there are answers, connections, and non-connections waiting to be uncovered and exploited (or ignored) in the time and manner of the players' choosing -- however odd, everything has its place in the hidden history of the new world!

I've pre-keyed the 10-mile squares (not using hexes!) of the New Bullishire sandbox only for developed adventure sites, stocking most areas via dice-roll only when the PCs explore it.  In effect, I'm discovering the contents right along with them.

How do you handle mapping when your explorers hex-crawl your sandbox?

Do you furnish hexpaper like X1 did all those years ago?  I find that takes me right out of the immersion of the imaginary world.  Do you have a way to address this?
Posted by Jarrett Perdue at Saturday, June 09, 2018