A short-notice faculty meeting threatened to play havoc with our last scheduled club meeting of the year, but an old friend came to the rescue and provided supervision while my daughter ran a game of werewolf for the 20-some kids assembled.  The villagers won, but by the time I could return to club we only had about an hour left.

While Catan, Citadels, chess, and Betrayal at House on the Hill ramped up at other tables, we dove right back into the action on Dwimmermount's third level: "The Reservoir."

Last time Brunhilda (still grieving the loss of Ferdik) Dillam the Wizard, Danny the Arthropod, Ghaul the Elf and friends had finally discovered the chamber they had sought for roughly the last 10 sessions.


Using a recently discovered Engineer's Rod and a Comprehand Languages spell, Dilliam was able to follow the instructions that Loomis Dooin had given the party.  Reddish lights buzzed to life in the surrounding hallways, there was the swish and gurgle of fluid gushing through unseen pipes, and the very stone of the Dwimmermount began to gently vibrate beneath the explorers' feet.  They had successfully reawoken the mountain!

Reading the scrolling schematics that lit the strange, vitrium wall panels, Dilliam learned that this level contained a vast grotto-network reservoir of azoth ... hundreds of thousands of gallons (perhaps millions) of the precious, combustible stuff of raw, interstellar magic!  Making a few notes from the shifting map-display, he led them hasily toward the massive, adamantine hatch that sealed the storage caverns.

When efforts to force the hatch failed, Brunhilda and Dilliam soon fell to using the azoth they had recovered elsewhere to try and blow it.  A strange, gray garment, its sleeves and collar knotted, had been converted into a container for several gallons of the stuff.  Wedging this bag in place, they managed to detonate it without killing anyone.  The adamantine hatch was scorched but still intact.  The surrounding wall, however, cracked along the hatch-seam, creating a small gap.


Elated, Brunhilda started making plans to shove a torch through the crevice in hopes of detonating the reservoir and blowing the top off the mountain!

Brunhilda, it seems, wished to make all of Dwimmermount into a mighty pyre for her beloved.  Dilliam, having been corrupted by the mental carress of Arach-Naca, was intent on freeing himself from the influence of the dreaded demon the only way he could!

Perceiving that doom was at hand and having no strong desire to be blown to bits, Ghaul sprang to stop the pair with Kermit, the kitten, and Danny at his side.

While Matilda and Zekiel took to their heels, racing for the surface, a desperate battle between the party members errupted behind them.

As much as I value player agency, I don't usually allow PvP / combat within the party in my middle school games as it tends to result in squabbling and hurt feelings, but this made sense within the context of the campaign and it was our final session of course.

The battle see-sawed back and forth with Ghaul going down early under Dilliam's blows.  Danny (who abandoned his veggie-balloon) played a pivotal role, his poison forcing Brunhilda to suffer disadvantage on her attacks once his bites finally found a chink in her plate harness.  Kermit's spear snapped about the time that Dilliam fell and Brunhilda punted the kitten through the crack and into the reservoir. 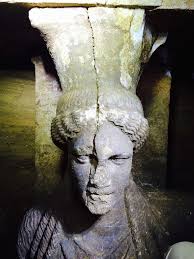 In the end, Kermit and Danny prevailed, though each had but a single hit point left.  Stripping but a few items from the fallen, they staggered back toward the stairs ... and straight into the arms of the cruel, marble maiden that guarded the top of the steps!


A natural 20 attack roll spelled swift doom for Kermit, but baby-headed Danny managed to wriggle free and scamper off into the shadows of level two ... becoming yet another strange inhabitant of Dwimmermount.

All in all, a good season with a great deal of fun had by all.  Unlike last year's group, these players were less interested in unraveling the deep mysteries of the mountain and its origins--frankly they were happy just to stab things and look for loot.  Irony, pratfalls, and unique characters made this group especially memorable.

Though this weekly campaign is over, I'll still be doing a fair amount of role playing this summer:


I'm pretty sure that it's going to be a full summer!
Posted by Jarrett Perdue at Wednesday, June 14, 2017