My friend, Steve Johnson (easily the smartest human I know), when not teaching physics, chemistry, French, history, working on his science fiction novel, or serving with his local church really enjoys games -- the more zany and over-the-top the better!

He's a seasoned convention gamer and is very comfortable hacking rules and adapting on-the-fly, so I was delighted when he recently invited me to join him at Saint Michael the Archangel to play All Quiet on the Martian Front ... which is exactly what it sounds like ... a War of the Worlds-WWI mashup.

However, it wouldn't be a Steve Johnson game if there wasn't a twist.  Here's how he made a good idea even better:

The entire game ran about four hours (including pizza) and in the end all of the "Central Park" shopping district and the Route 3 corridor were destroyed while historic downtown was virtually untouched.  All of the regular Martian bots, loboto-trons, and tripods were dispatched, but nobody could dent the huge "Dominator" Tripod who scattered the remaining defenders and stalked off alone toward Quantico Marine Corps Base. 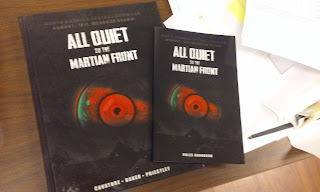 I'd love to get a similar, banner-sized map of Spotsylvania County to use with my students in our after school club ... we could stage a zombie invasion or some-such.
Posted by Jarrett Perdue at Friday, August 21, 2015